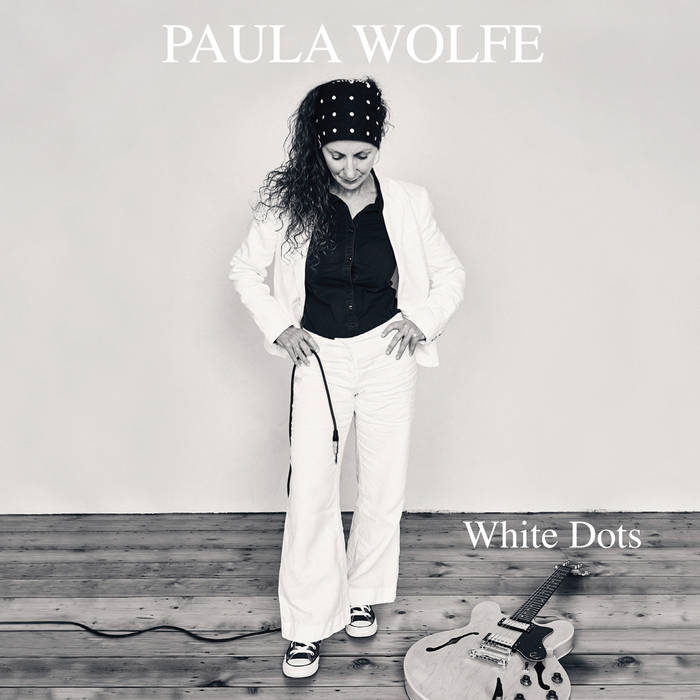 Paula Wolfe’s new album, White Dots (* * * * MOJO) has been hailed ‘exquisite’ with her production on this latest ‘collection of songs that combine glorious Brill Building-style chant, jazz drums and lustrous strings’ positioning her as ‘a latter-day Carole King’(Lucy O’Brien). Performed with ‘a high clear voice, observational humour and a quiet sense of drama’(LoB), Wolfe presents a new array of characters that include a cross-dressing train driver who abandons the drudgery of his shift for the glamour of a night club, an ageing bachelor looking for late love online and Mexico City’s street children working its nocturnal streets while their compatriots busk on the Paris Metro on the other side of the world.
Joining Paula in her sonic tales of survival are an eclectic range of musicians all of whom she recorded in the Grade II Listed, 16th century country house she renovated to house the project. The richness and depth in the sound are in part thanks to their performances, captured by Wolfe amidst the natural acoustics, provided by the ancient beams and the timber and stone fireplaces and floors. Adding to that warmth is the state-of-the-art analogue outboards used to master the album in another ancient rural retreat by veteran mastering engineer and Sound on Sound writer Eric James. James has also remastered Paula’s entire back catalogue due for re-release following the new album.
Throughout her career, the work of the London and Norfolk based artist-producer has consistently received strong support. It is no surprise, therefore, that this ‘joyful soul pop follow-up’ (LoB) to her critically acclaimed 2009 Lemon (* * * * Mojo, * * * Uncut, * * * Maverick) has proved no exception. Viewed as ‘sweetly addictive’ in which the ‘flowing arrangements build and drive each track, leading us through a world of broken love, memory and magic realism’(LoB), this third album confirms Paula Wolfe as ‘a major talent’(MusicOMH) and affirms her reputation as ‘a splendid songwriter’ (Nigel Williamson, Uncut), who writes ‘exceptional’ lyrics delivered with her ‘gorgeous’ voice (Laura Bethel, Maverick). Little wonder her intelligent balancing of lyrical theme and musical form have earned her personal praise from the Head of Music at BBC Radio 2 and 6Music (Jeff Smith) and the type of accolade expressed by one critic who has declared her work ‘A flawless exercise in modern art, that boasts enough melody to make this as warm and approachable as possible, whilst being unafraid to extend an olive branch to the musos; stunning’ (Tom Brampton, New-noise.net).

Having garnered widespread praise for ‘hitting the mark on both sides of the desk’ (Neil King, Fatea Magazine), Paula is no less acclaimed as a live performer and has been described as simply ‘mesmeric’ (The Guardian Hay Festival) and ‘brilliant’ (Sky Arts).

A cross-dressing train driver who likes lipstick and high heels. Two boys in Mexico City playing trumpet and tuba on the streets. A woman sitting in a car park in someone else’s car, heartbroken. These are characters on Wolfe’s latest album, a collection of songs that combine glorious Brill Building-style chant, jazz drums and lustrous strings. Like a latter-day Carole King, Wolfe delivers each track with a high clear voice, observational humour and a quiet sense of drama. The barely there bossa nova beat on ‘Traces’, the fuzzy guitar and exquisite lament of ‘White Dots’, the wistful trumpet of ‘Paris Metro’ - flowing arrangements build and drive each track, leading us through a world of broken love, memory and magic realism. Sweetly addictive. Lucy O’Brien


Velvet Sheep
‘Song For Ewe’ is the feature where artists & music people beloved by Velvet Sheep choose an obscure song they’ve been listening to that day. Today’s guest is a learned and earnest singer songwriter, producer, guitarist and writer with an ear for a subtle tune and a line in compelling storytelling and her latest tune has a great tale. Taken from an upcoming album called “White Dots”, the song “Georgia Blue” was inspired by a trip Paula took by train from her Norfolk studio to interview Isabella Summers from Florence and the Machine at Dean Street Studios in London for what was then PhD research but has since turned into a book called “Women in The Studio, Creativity, Control and Gender in Popular Music Production” about music production and gender.
The train back that evening was delayed as the scheduled driver didn’t turn up for his shift (in itself not super remarkable in London) but spun into a beautiful yarn about a cross-dressing train driver who simply wanted to feel beautiful rather than driving a train from London to Norwich on a brass monkeys night in the winter.
“White Dots” is Paula Wolfe’s third album and also includes songs about an ageing bachelor looking for late love online and Mexico City’s street kids working noctural nightshifts “while their compatriots busk on the Paris Metro on the other side of the world”. Part Carole King, part Kirsty MacColl, all unerring charm.
Welcome to VS, the super-smart, keenly observant, niftily talented Paula Wolfe. Nick Hutchings

Travellers Tunes
London and Norfolk based artist (and producer) Paula Wolfe has returned with her new single ‘Georgia Blue’.
In 2019, with European elections approaching, couldn’t be released at more apt time. With an undercurrent of hostility permanently in the air, human emotions and progress are sliding out of view.
Wolfe’s tale of a cross dressing train driver, with crisp warming vocals and swooning production is a stark reminder to be less selfish. It’s written with great characterisation and a strong sense of Englishness, it’ll recall the eloquence of Ray Davies and Paul Weller in their pomp.
Despite the prevailing beauty on show, there is a solemnness to the protagonist’s journey that should spark memories of ‘Saturday Night Sunday Morning’ or Pulp’s ‘Common People’. A sense of ordinary people living extraordinary lives burns bright.
This is ‘That’s Entertainment’ for the woke generation and boy does society need art like this to bring different generations together once again. Mike Adams

Bandcamp Daily  your guide to the world of Bandcamp

Benji B talks about his new compilation ‘Deviation Classics’